This story is about Chief Brody's 1975 Chevy Blazer and a JAWS dream come true. When I first saw Jaws at age 8, I was mesmerized. It’s still my favorite movie today, and Brody, Hooper, and Quint remain my hero’s. I’m pretty sure I can scientifically prove it’s the greatest movie ever made. I was enamored by Chief Brody’s 1975 Chevy Blazer, and dreamed of driving it one day. Being a Jaws nut is in my DNA, from landing on a Twisted Tea back label dressed as Quint, to giving my daughter the middle name of Ellen, based on Chief Brody’s wife’s first name in the movie.

It’s no coincidence that when I moved to Boston in 1997, Martha’s Vineyard (aka: Amity Island) became a recurring vacation spot. I frequented the Jaws tours and have countless pictures from all the locations the movie was filmed. I may have even re-enacted some of my favorite scenes when no one was looking. 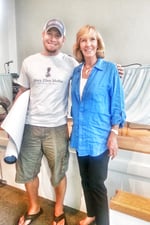 Jaws continued to be a part of my every-day life as an adult. Attending JawsFest on Martha’s Vineyard in 2012 was a life changing event. I met many of the movie’s living characters and those involved in the making of the movie, from Joe Alves and Carl Gottlieb to Mrs.Kitner and Deputy Hendricks. Most impactful was meeting Wendy Benchley (wife of the late author of Jaws, Peter Benchley) which lead to my involvement in Shark Conversation.

Another big Jaws life event was when The Spicy Shark was a vendor at Shark-Con in Tampa, FL in July, 2019. I was in heaven. Luckily, I had my sister and cousin manning our booth as I was running around like a kid in a candy store. I spent more money than I made, and loved every minute. My favorite moment was getting a picture with Alex Kitner (boy on the raft), and Chrissy Watkins (girl from the opening scene), with a bottle of Spicy Shark!

That brings us to the Blazer. Since my mid-20’s, about every 3 months I would check to see if there was a 1975 Chevy Blazer for sale somewhere in America. Any in great condition were far out of my price range. Queue March 2020, living in Quarantine, and doing my quarterly Blazer search. This time, I found one going to a GAA Auction in North Carolina in July, in amazing condition, AND already with the same paint job from the movie! Coincidentally 2020 is the 45yr anniversary of Jaws; it felt like the universe was speaking. I told my wife my budget, and she responded, “You work 8 days a week, have never bought a toy for yourself, and have been talking about this truck since we first met, go for it.” That’s what I needed to hear.

Friday July 24th at 2:30pm, the Blazer came up to auction. I was on the phone with a gentleman

bidding on my behalf. It came down to me and one other bidder going back and forth. I eventually put down my highest and final bid….and WON!   I was shaking with joy, and in a state of shocked disbelief. Next up was getting the truck back to New Hampshire. After receiving some steep quotes on having it hauled up, I went against everyone’s advice, got some temporary plates from the DMV, and booked a flight to Greensboro, North Carolina to drive my new baby home.

One week later, I hopped on a 5:30am flight out of Boston, connected in Charlotte, and stood in front of my 1975 Chevy Blazer in Greensboro at around 10:30am. I started the engine…and, it didn’t. So I jumped it. Pretty soon after I learned this was not fuel injection, and that I needed to pump the gas as I turned the ignition. Learning where and how to use the windshield wipers and headlights on the fly was a little panic inducing. I was holding my breath when I realized the fuel cap needed a key, which thankfully was on the keychain. Around 2am, 14 hours later, I arrived at my parents’ house in NJ for a quick overnight. 7 hours after waking up, my childhood prize pulled into Portsmouth, NH. And there was a lot more to do.

First I gave him a name, Martin (Chief Brody’s first name). “Amity” vanity plates were ordered. Cherry lights were purchased from Windy City Novelties, and the same style hubcaps from the movie were ordered from Hubcaps.com & Hubcap Hilton. Allan from The Tire Loft in Portsmouth helped remove the hard top, and worked tirelessly to get Martin in shape to pass inspection. The back panel was painted white, and the Roll Bar was painted black at Ben’s Auto in Portsmouth to match Brody’s in Jaws. The final step, at Sticker Cabana in Hampton, was having the vinyl Amity Police Dept stickers for both front doors, and The Spicy Shark branding on the back.

Words can’t describe the feelings when this was all completed. In a challenging year, this was an incredible bright spot. I’m so excited to drive Marty around the Seacoast, and hopefully put a smile on other peoples’ faces too. Amity, as you know, means friendship. 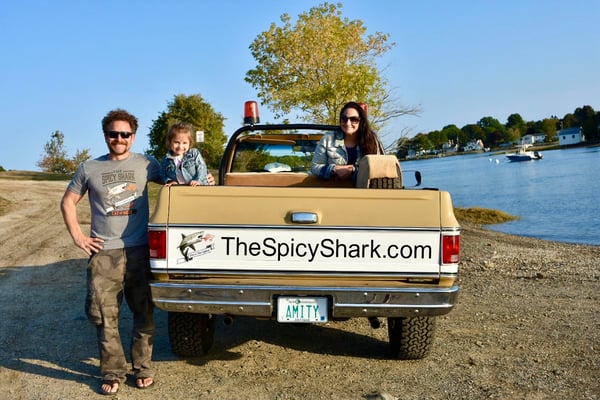 Checkout Seacost Online for Elizabeth Dinan's article that made front page news in The Portsmouth Herald.

Also, shoutout to Michael Rice for the Chevy Blazer photography.