Because there are such a wondrous variety of peppers to choose from, many people find it intimidating to first delve into using peppers for the many diverse applications for which they are suited.  Many even assume that all peppers are hot; when in fact, peppers range from sweet and very mild to extremely hot.  Understanding which pepper to use in hot sauce and when can be a daunting process.  This guide to pepper varieties will help you begin to dive into the rewarding world of cooking with peppers!

While not actually a pepper, Black Peppercorn is the most traded spice in the world!  The fruit of the piper nigrum plant – a flowering vine – comes in three common varieties, black, green, and white.

Although not true peppercorns, other varieties – popular in various ethnic cuisine – are used and sold as peppercorn; such as Brazilian Pink Peppercorn, and Szechuan Peppercorn. 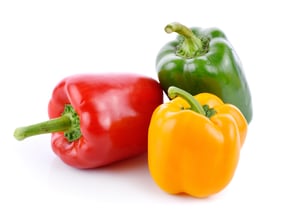 Bell peppers are most likely the best-known sweet pepper.  They are sweet, flavorful, delicious, and have no heat at all!  They come in may colors, including green, red, orange, yellow, purple, and white.

Pimento peppers are wonderfully sweet, and great for roasting!  They are deep red and often used as stuffing for olives, or in cheese spreads.  Cherry peppers are a super sweet pepper, great for stuffing or pickling.  They are reminiscent of tiny, compact bell peppers.  Watch out, though; these little guys can be spicy! 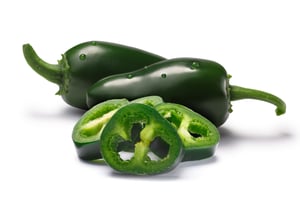 Although some of these peppers would be considered by many to be quite hot, when compared to their hot and very hot cousins, they are quite moderate.  Some of these medium heat peppers are the most famous of all varieties, and are the base for some of the most well-known sauces and dishes.  Examples include Jalapeños, Cayenne peppers, Tabasco peppers, Thai chilis, Serrano peppers, and Poblano peppers.

Most medium (or moderate) peppers are quite flavorful, and are a favorite of cooks and customers the world over! 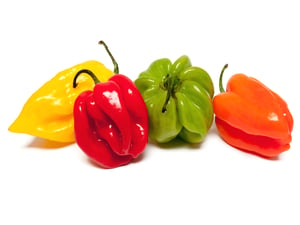 Hot peppers are to be taken seriously!  At over 250,000 on the Scoville Scale, these peppers are to be used in small doses, except by experienced personnel!  This level is where we start getting into the Bonnet Peppers, Capsicum Chinense.  This Caribbean species of pepper included the hottest varieties in the world!  With very few exceptions, the peppers in the rest of this article are at least hybrids of Capsicum Chinense.

Non-Capsicum Chinense varieties of hot peppers include some African varieties, such as Wiri-Wiri Peppers, and some of the hotter Thai chilis. 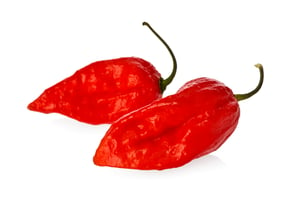 These are the hottest peppers in the world.  Not for children!  Not normal children, anyway…  These peppers are all rated at over one million Scoville Units!  Although, these peppers each have amazing, one-of-a-kind flavor; it is up to you to decide whether the juice is worth the squeeze!

Bhut Jolokia, better known as Ghost Pepper, will knock your socks off!  This Capsicum Chinense hybrid originates from India, and packs around 1,000,000 Scovilles!  Naga Morich is a Capsicum chinense hybrid coming in around 1,100,000 SHU!  Naga Viper is rated at 1,300,000 SHU!

From this point forward, all the hottest chilis in the world are pure Capsicum Chinense:

In August of 2013, Guinness Book of World Records officially declared the hottest pepper in the world.  At 2.2 million Scovilles, the Carolina Reaper is the reigning Hottest Pepper in the World!

Regardless of your flavor preferences, or heat tolerance, there is a pepper out there perfect for you, and your palate. Whether fresh, sautéed, dried and ground, or as a sauce; understanding our varieties of peppers will help us know how they can fit into our cooking and hot sauce making!