You love hot sauce, we love hot sauce, but how do we measure that love?  We can't. But, we can measure the heat. Peppers exist in great variety, and so do the sauces we make from them.  Some pepper sauces have little to no heat at all; while some will have you wishing for the intervention of a higher power! In this guide to the hot sauce heat index, we will address pungency, the relative heat of capsaicin, and how to find your happy place on the hot sauce heat scale.

What is the Scoville Scale?

In 1912, Wilbur Scoville invented a system to measure pungency of peppers.  In other words, to measure the relative heat of Capsaicinoids, capsaicin being the active chemical in hot peppers.  Today, the Scoville Heat Unit (SHU) is measured using chromatography, which is an analytical technique used by separating a mixture into its individual components.  However, the measurement was originally taken by diluting the pepper’s extract with water.  Drops of water would be placed into the pepper extract and counted until the mixture no longer tasted “hot.”

Which Are the Hottest Peppers? 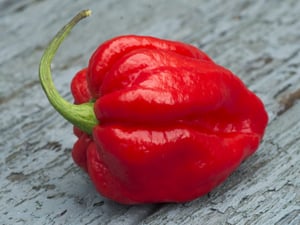 The Carolina Reaper is a breed of Capsicum Chinense, or Bonnet Pepper.  In fact, all of the hottest varieties of peppers are a breed, or a hybrid breed, of Bonnet Pepper.  Other than the Carolina Reaper, these dubious cousins in oral uncomfortability include some of the most notorious suspects:  Trinidad Scorpion Pepper; Bhut Jolokia (aka: the dreaded Ghost Pepper); Habanero; Scotch Bonnet; 7-Pot Pepper; Devil’s Tongue Pepper, and a plethora of other torturous delights.  These varieties may be hotter than Hell on Sunday (300,000 to over 2,000,000 SHU), but they all possess a wonderful and unique flavor that, to the initiated, is to die for.

It should be noted that one can “get used” to hot peppers, and must eat increasingly spicy peppers and pepper sauces to achieve the endorphin release triggered by the capsaicin in hot peppers. It is recommended to start the journey into monk-like pepper tolerance with a reasonable level of heat.

Are There Hot Peppers That Aren’t So Dang Hot? 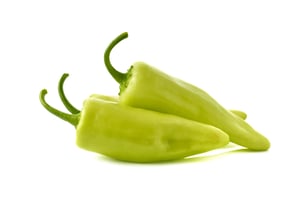 Thankfully, there are a great many, wonderfully delicious peppers on the lower end of the Scoville Scale that will provide the novice pepper muncher with that fantastic rush of endorphins and good feelings!  The beloved Pepperoncini, for example, has a SHU of just 1000; and is a great way to jump into enjoying hot peppers.  Other great examples of relatively mild hot peppers include the very delicious Peppadew (1200 SHU), Ancho (1500 SHU), Anaheim Peppers (2500 SHU), and Guajillos (3000 SHU).

Are Hot Sauces as Hot as the Peppers? 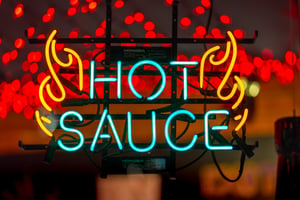 Although, many of the peppers that go into some of the more popular hot sauces – such as Cayenne, Tabasco, Chipotle (smoked Jalapeno), or Habanero peppers – are quite hot; the sauces themselves often are mild by comparison.  For example, Frank’s Red Hot has a SHU of merely 450, the Tabasco brand sauce of just 700 SHU, and Texas Pete's just 750 SHU.  This is because the sauces are typically diluted with other ingredients.  Common ingredients include: vinegar, water, sugar, garlic, carrot, citrus, salt, and herbs & spices.  In fact, finding a pure pepper paste sauce is not only rare, but dangerous!  Watch out for those tasty devils, or find a concentrated dose of evil resting right on the delicate buds or your tongue.

Quick Guide to cool down:

Which Hot Sauce is Right for Me?

When selecting your ideal sauce, keep in mind that the heat index of the sauce can vary quite a bit from the peppers they were made from.  Be sure to check the ingredients to see what else has been added to the sauce that may affect the heat.  If the sauce is runny, thin, or seems watery then it most likely contains quite a bit of vinegar. This will not only dilute the pepper, but also provide instant relief to the heat because vinegar is made from alcohol by over-fermenting wine.

However, if the sauce is thicker, or more of a paste, check to see that it contains some type of carrot or vegetable puree.  If there is no other vegetable, or if they are low on the list of ingredients on the bottle, watch out; you are probably dealing with a very spicy sauce.  Especially if the peppers used are one of the varieties of Bonnet Peppers, the Capsicum Chinense.

Whatever your preference for heat, flavor, or consistency; someone is making a sauce or two just perfect for you!  The world is full of wonderful sauces and peppers waiting to delight your palate and excite your senses.