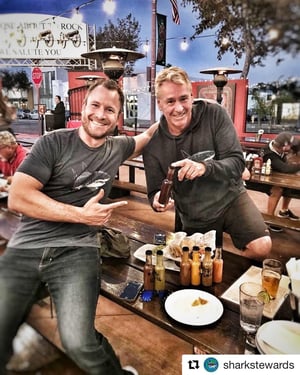 When I first saw the movie Jaws at age 7, I was in love.  I couldn’t get enough of sharks and the water, and to this day I take Shark Week off as vacation from work.  My early aquatic life plan included becoming a marine biologist, but when that didn’t pan out, I knew I wanted to stay involved with the ocean and their sharks somehow.  During the summer of 2012, I was on Martha’s Vineyard for JawsFest and became part of the organization, Shark Savers.  Their founder, Wendy Benchley, wife of the late Peter Benchley (author of Jaws), taught me about the need for shark conservation and activism.

After starting The Spicy Shark, I wanted to be more specific in our conservation efforts to help end the cruel and unsustainable practice of shark finning.  David McGuire, the founder of Shark Stewards, was one of the first people I was able to touch base with, and we hit it off with this shared mission when we met up in Los Angeles.

I decided to ask David a few questions about shark conservation, Shark Stewards, the grotesque practice of shark finning, and what we can do to help.

Tell me about why Shark Conservation is important to you, and how and why you started Shark Stewards? 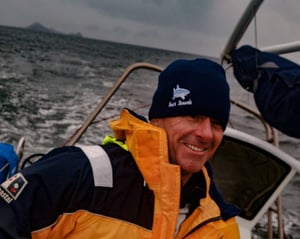 Originally founded as Sea Stewards in 2003 to save sharks and fight the shark fin trade, I produced a film called Shark Stewards of the Reef, and advocated to ban shark fins in California and other west coast states. We became Shark Stewards in 2015 when we became part of the Earth Island Institute. Pictured, David working at the Farallon Islands near San Francisco, home of many great white sharks.

At some islands I dove with over 100 sharks and was in awe of their beauty. As we sailed between islands we encountered small fishing boats with longlines set for tuna. These lines also inadvertently trap scores of sharks.

Ten years earlier, the crew would release the sharks; now, we discovered, they were killing the sharks for their fins. On one dive we discovered the carcasses of blacktip reef sharks rolling in the shallows, dead and without fins.

Shark Stewards mission is to restore ocean health by saving sharks from overfishing and the shark fin trade, and protecting critical marine habitat through the establishment of marine protected areas and shark sanctuaries. I first learned about shark finning first-hand while sailing across the Pacific.

What are the greatest successes you and other pro-shark, non-profits have had in helping stop Shark Finning and the Fin Trade?

Shark Stewards initiated the North American shark fin trade ban movement. Since we started introducing shark fin bans in US states beginning in 2006, we have lead or supported 12 state bans. We also helped with the introduction of the USA shark fin trade elimination that is currently in the US House. If passed, this would become the first large trading nation to ban the trade of shark fins.

The shark fin trade has been reduced significantly in the US and globally, likely due to increased awareness, but also perhaps because of declining shark populations. 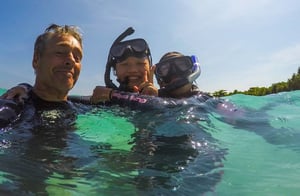 Since 2015 we began working in Malaysia, #3 in the shark fin trade and a top shark killing country. We also started a Shark Stewards chapter lead by young people in China to raise awareness and tracking the trade in Guangzhou. Pictured above, David helping train young Chinese divers in Malaysia.

The future of Shark Stewards

What does the future look like for Shark Stewards and your cause?

We are heading to Sri Lanka this year help list endangered giant Guitarfish and Mako sharks under the CITES Appendix II for International protection. We are planning an Ocean Film Festival in Guangzhou to help increase the movement within China- the source of 95% or more shark fin consumption.

How can we help stop the fin trade? 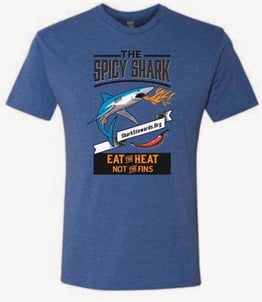 What can the public do to help in stopping Shark Finning and the Fin Trade?

Sign the petition on our website at sharkstewards.org, write your congressman to support HR737, share information on social media advocating for sustainable seafood, and at all costs avoid shark fin soup. People can also buy some Spicy Shark Blue Shark Hot Blueberry Syrup and $1 will go to Shark Stewards or a Blue Shark T-shirt and $5 of proceeds going to Shark Stewards.

Tell me about how you came upon “Year of The Blue” and the focus on Blue Sharks this year?

I grew up with blue sharks in the waters off the southern California channel islands.  Once the most abundant open water shark globally, these beautiful sharks are disappearing because of the shark fin trade. 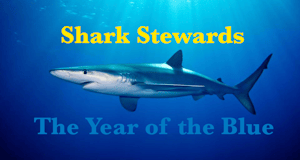 As part of a film project we started looking for blue sharks and are having a hard time finding them off California where they are not fished commercially. These highly migratory sharks are the most common killed for their fins. We learned that they have been reduced by as much as 90% in the Atlantic and desperately need protection.

An estimated 20 million blue sharks are killed annually and their populations are declining globally. Blue sharks dominate the shark fin trade, and landings worldwide have nearly tripled since 2000. Without global cooperation, the lack of management for blue sharks and extensive targeting by fisheries place them at great risk of extinction.

Do you like hot sauce and spicy food?  What’s your favorite food and hot sauce combo?

I love spicy food. Growing up in Southern California I learned to eat hot Mexican food early on and made my own salsas in college, taught by my friend's mother who was from Oaxaca.  I'm crazy about Spicy Shark's Tiger Shark with the Ghost peppers on my corn, black bean, cilantro and cheese enchiladas. 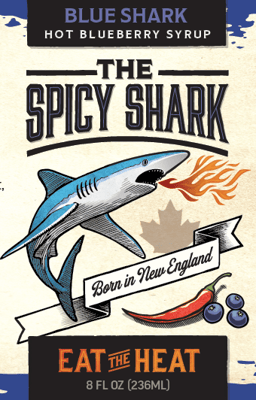 We are proud to announce a partnership with David and The Shark Stewards with their Year of The Blue Campaign.  From now until the end of 2019, $1 of all website purchases of our Blue Shark Hot Blueberry Syrup will go towards the Shark Stewards in their fight against Shark Finning.

We have also created a custom Spicy Shark & Shark Stewards Blue Shark T-shirt that is now available to purchase on our website.  $5 of each of those T-shirts will also be sent to the Shark Stewards to help with this critical environmental measure.  We hope you all join this noble cause and support The Shark Stewards and all of our oceans’ sharks.

Here are some helpful links with more shark information: