The killing of endangered animals for money and trophies is not an endeavor that most people would support, yet that activity occurs all summer and fall, every year, throughout the USA, for our sharks. We are so proud that The Spicy Shark was able to make a positive impact and help stop the last two remaining shark killing tournaments in New England.

After the 2021 cancellation of the Monster Shark Tournament in Fairhaven MA sparked by Eli Roth's shark documentary FIN, only Block Island, RI and Newburyport, MA remained. Based on the respective dynamics of these two tournaments, different strategies were implemented to end them both in 2022.  However, the shared key to success was the local community getting together and speaking out against them.

There's not an exact science to stopping a shark kill tournament. We can tell you our story with each of these events in hopes that it helps spark motivation or inspiration in your endeavors to have a similar positive impact.  Here's a general plan to help get you started: 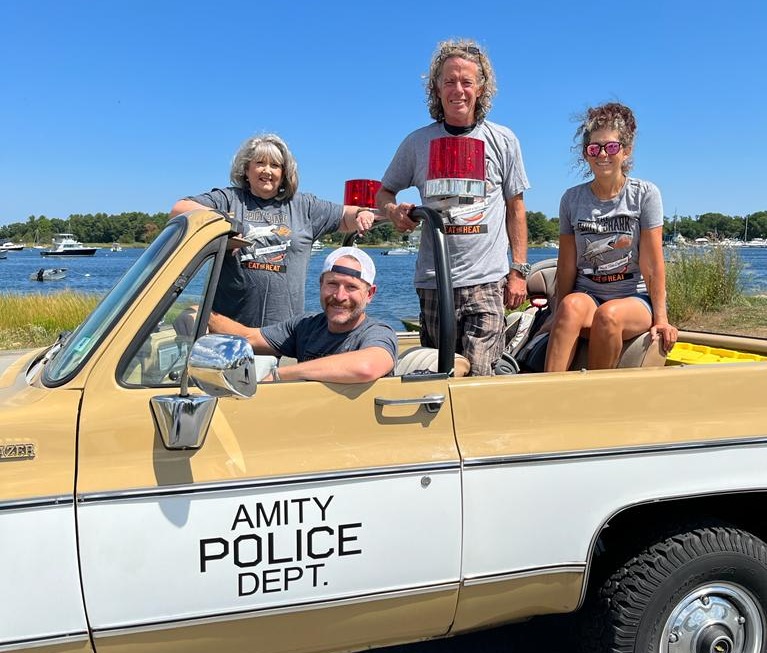 The following is our story of how the last two Shark Kill Tournaments in New England came to an end.  Gabe DiSaverio, owner and founder of The Spicy Shark and The New England Hot Sauce Fest (benefiting ocean nonprofits), led the charge with the help of many shark friends and volunteers. The following is dictated, but not read, by Gabe himself:

How the Block Island Giant Shark Kill Tournament was Cancelled

This is the tournament where we began this year. The Block Island, RI Giant Shark Kill Tournament. We were aware that this tournament had been killing sharks for money and trophies for 8 consecutive years. We began by talking to our Spicy Shark accounts on the island, and learned that even in a community as small as Block Island, many were not aware this tournament was in existence. Those that did know, had a highly unfavorable opinion of it.

The Op Ed had an impact, and people started calling the marina it was to be hosted at asking them not to. Even though the marina had hosted the tournament in previous years, they now were hearing people speak up and they listened. I had a long positive conversation with the owner of the marina, and he confirmed the decision had been made to not allow the tournament to use their hoist this year. 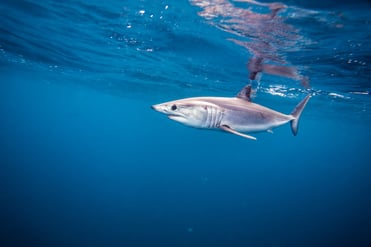 Rumors spread that the tournament was going to move to one of the other two private marinas. Although management at both told us they would not be hosting it, no one knew for sure as these tournaments often exist through secrecy and mistruths. Four passionate conservation-minded people, Amber, Amanda, Tiffany, & Zimy, took the ferry over to Block Island to find out first-hand. While we were down at Shark-Con in Florida that weekend, they kept giving updates and eventually confirmed the great news that the tournament had in fact been cancelled.

Although also in existence for 8yrs, Newburyport was a different monster...

How SHArks were eliminated from the Newburyport Shark & Tuna Tournament 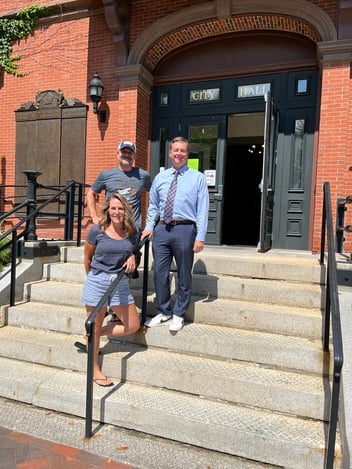 In this case, the tournament used the town dock and hoist for their event, so local government did have a say in the matter.  In tandem with FIN Director Eli Roth, we were very active on social media to shine a light on this effort to have sharks taken out of this Shark & Tuna Tournament in 2021.

Gabe wrote an Op Ed in the Newburyport Daily News, had an appearance on NBC News along with Eli, sent supportive letters to the town from friends Joe Romeiro of 333 Productions and Stefanie Brendl of Shark Allies, and secured a meeting with the (then) mayor.

Although significant effort was made, the end result was, endangered sharks would still be killed. As soon as the 2021 tournament ended in July, we began our advocacy for sharks being taken out of the 2022 tournament.

Our first call was to the Newburyport Chamber of Commerce and we found that they were not in favor of the shark killing portion of the tournament. Although they didn’t have decision making power, they encouraged us to reach out to the two gentlemen who were running to replace the current Mayor in November.

We did just that, and received an encouraging response from the eventual winner. While waiting to find out the election results, we reached out directly to the tournament organizer. Eventually, the two of us had a dinner together in December of 2021. Although it was an amicable and respectful meeting, there was no change of opinion, and he was clear sharks would continue to be killed.

Once new mayor Sean Reardon was sworn in, we began emailing him. He gave us 30 minutes of his time for a phone conversation about the subject in January. The next step was engaging with the Newburyport City Council and we began with an outreach email. We were encouraged by the number of responses that shared our viewpoint, and many said they would investigate the situation.

In the meantime we wanted to hit the streets. We reached out to our local ocean conservation friends, the Blue Ocean Society in Portsmouth, and learned they had volunteers that lived in Newburyport. We met with one of the volunteers and were excited to find that she and two others were eager in supporting the cause to have sharks taken out of the tournament. Pictured above with Gabe are volunteers Mike, Meghan, & Kat, and "Marty," Gabe's 1975 Chevy Blazer, a Jaws replica.

We went to our local printer to make up some custom cards about the tournament to pass out in town. We also booked ourselves as a vendor at the July 4th Newburyport Waterfront celebration. At that event, we talked with locals, and passed out the tournament cards.  The same learning we had from 2021 was reinforced….100% of residents we spoke with were unaware there was a shark killing tournament in their town, and 100% of those residents did not support it.

The volunteers were very active in handing out the cards around the community, and people began to speak up as they rejected the idea of a shark killing tournament continuing to take place in their town.

We re-engaged the mayor and city council with this information, as well as the breaking news that NOAA had made it illegal to kill Mako sharks of any size due to their dwindling populations, effective 7/5/22. City Councilwoman Connie Preston became a strong advocate and supporter of this cause, and took the time to meet with me in person (pictured with Mayor Reardon). 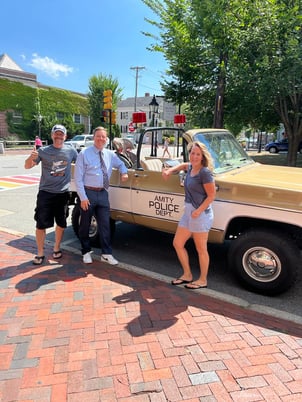 Less than a month before the start of the tournament, and after a year of advocacy, Mayor Reardon made the official decision that if the town dock and hoist were to be used, sharks had to be taken out. The tournament agreed to the stipulations.  Check out the front page story written about this effort in the Town Common HERE

None of these success stories could have come to fruition without a team effort. If you speak up and plead your case respectfully, good things can happen. Although both of these successes are wonderful wins for shark conservation that we are incredibly proud of, there is still a tremendous amount of work to be done.

There's no guarantee these tournaments won't try to come back in different towns under different names, but we will certainly be watching. Hawaii became the first state to ban killing sharks all together, and we plan to be part of the effort to bring that type of legislation to other states.  Ending more shark killing tournaments across our own country is an actionable step that can immediately help sharks as the battles of the shark fin trade, squalene liver harvest, and bycatch continue to press on.

Follow us @TheSpicyShark for more information on  Shark Killing Tournaments and Shark Conservation: